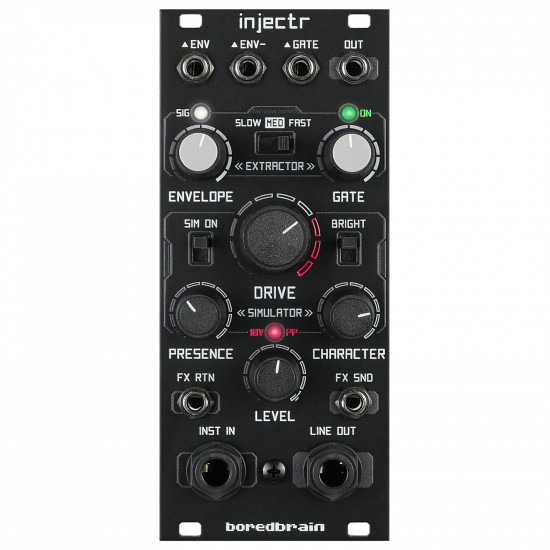 Instrument Preamp
Injectr’s high-impedance instrument input, INST IN, feeds straight into a variable gain circuit which can produce a range of tonal responses, from clean to heavily overdriven. The smooth character of the DRIVE parameter is made possible by a soft-clipping topology using a classic 4558 op amp and four diodes, two silicon and two germanium.

A post-drive LEVEL control is provided to trim the output of the preamp stage, which is accompanied by a RED LED, indicating that the signal is reaching the typical eurorack audio level of 10 Vpp. Because stringed instruments tend to have strong transients, it is suggested to adjust the LEVEL control so that the LED is illuminated with moderate to heavy playing.

CV Extractor
Buffered directly from the instrument input is a responsive envelope follower circuit, which produces a control voltage signal at the ENV output jack based upon the input’s volume dynamics. The ENVELOPE parameter adjusts the sensitivity of the circuit, depending on how the instrument is being played. The adjacent WHITE LED is a visual indicator of the envelope follower’s output. The switch labeled SLOW MED FAST selects the follower’s response time, affecting both the rise (attack) and fall (release). An inverted copy (negative going voltage) is present at the ENV- output jack.

Additionally, a 0-5 V gate control signal is present at the GATE output jack, which is derived from the envelope signal and is indicated by the GREEN LED. The sensitivity of the gate extractor circuit is adjusted using the GATE parameter, and essentially sets the threshold at which the gate signal is triggered on and off.

Amp Simulator
One of Injectr’s most useful features is the Amp Simulator circuit. Using a complex arrangement of analog filters, it imparts an amplifier-like quality to the signal.

The CHARACTER parameter alone can dramatically alter the sound, giving the user combined control over the middle “dip” frequency and bandwidth. The PRESENCE parameter adjusts the low-end response, thickening or thinning the overall tone, whereas the BRIGHT switch enhances high frequencies. In combination with pickup selection and tone controls of the guitar itself, these parameters provide a wide range of tones all while staying within the eurorack system. If preferred, the Amp Simulator can also be toggled off by disengaging the SIM ON switch.

High-gain modules such as overdrive/distortion and intense compression may cause unwanted feedback in the FX Loop, and so are best patched after Injectr from the OUT jack.

Outputs
The OUT jack provides a post-simulator eurorack-level audio signal, which is useful when it is to remain in the system to be processed or mixed with other signals.

The LINE OUT jack provides the same signal at line-level, which is suitable for sending the signal out to external gear, interfaces and amplifiers. 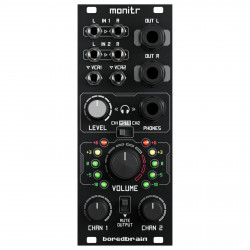 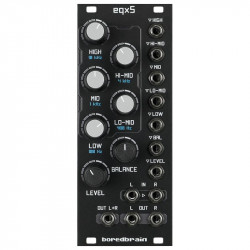 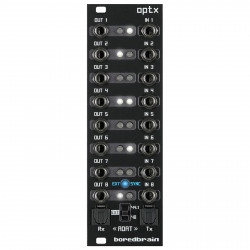 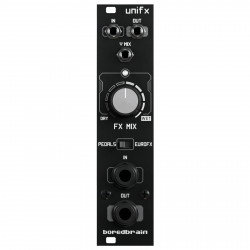 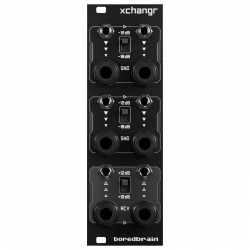 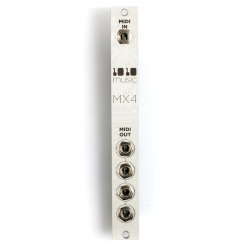 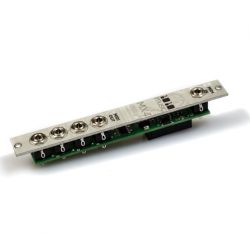 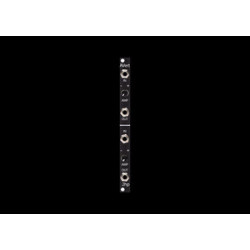 Pre-Order
2hp Avert Black
AVert is a dual attenuverter. Each channel offers the ability to attenuate and invert any input signal. The signal present at channel one is normalled..
95.00€
Ex Tax:79.83€
Add to Cart
Add to Wish List Compare this Product
Buy Now
Quickview 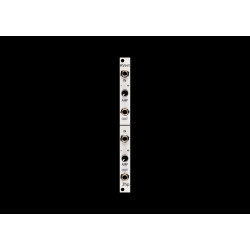 Pre-Order
2hp Avert Dual Attenuverter
AVertAVert is a dual attenuverter. Each channel offers the ability to attenuate and invert any input signal. The signal present at channel one is norm..
95.00€
Ex Tax:79.83€
Add to Cart
Add to Wish List Compare this Product
Buy Now
Quickview 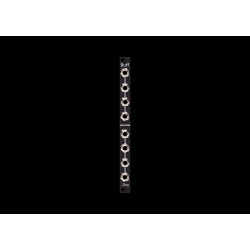 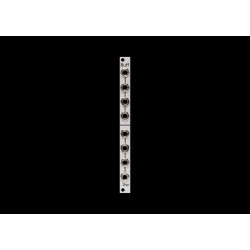