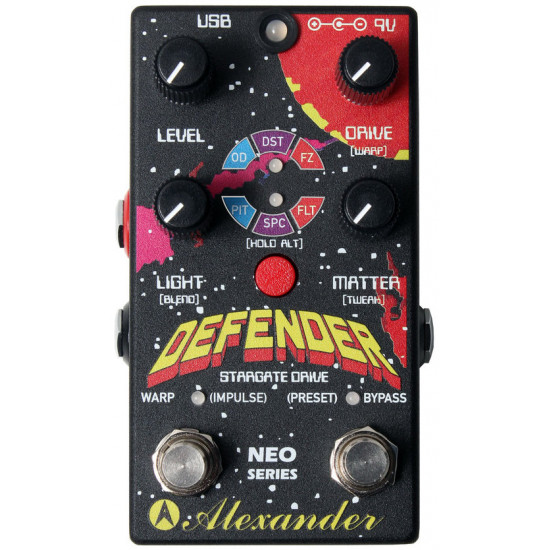 As captain of the Defender, your mission is to protect the galaxy using the awesome power of the Stargate Drive. Blast off from your deep space base and take control of the universe.

Why should you use a digital distortion pedal?

No idea.  Analog is better, right?  You should probably go buy a Tube Screamer.  But if you're interested in expanding your horizons, read on.

One of the things we love about making pedals is that we get to come up with things that are new and exciting.  The prospect of doing another "me too" overdrive pedal wasn't really that appealing.  We decided that the best way to approach a digital distortion pedal was to think of all of the things you couldn't do with analog and proceed from there.  We love this pedal, and we hope you like it too.

The sonic scientists at Alexander Pedals have been working overtime to cram the most pedal into the smallest box, and we now present the Neo Series!  Each Neo Series pedal incorporates an advanced 32-bit microcontroller adding presets, expression, and MIDI capability.

The Neo Series pedals are small but mighty!  Imagine having a single pedal on your board that can access up to 4 separate preset tones with a touch of your toe.  Connect an expression pedal to "morph" between two distinct settings for each preset for dynamic real-time effects.  Or connect the Neo Footswitch to enable your choice of preset select, tap tempo, or start / stop the sequence in real time.

All Neo Series pedals feature a simple yet powerful preset functionality.  Hold the bypass footswitch to move the pedal to the next available preset, and the pedal will reconfigure itself on the fly.  All knob values and the effect mode settings are recalled, allowing you to set up to four unique tones.  Want more presets?  Simply connect a MIDI controller to the EXP port on the side of the Neo Series pedal and access up to 16 presets total.

To load a preset, hold the bypass footswitch down or send a MIDI program change from 0-15.

To save a preset, hold the Select button down and then hold the bypass footswitch.  The pedal will save the current settings to the current preset.

Any changes you make to the pedal settings will be lost when switching to a new preset unless you save the current preset first, so be careful!

The EXP port on the left side of the pedal can function as an expression pedal, foot switch input, or a MIDI input.

Foot Switch:  The Neo Footswitch (sold separately) allows for preset select or WARP - all with LED indication.  The Defender will also work with a standard tap tempo footswitch.

MIDI:  The Neo Series pedals can connect to a compatible MIDI controller to control all of the pedal functions plus access 12 extra presets, for a total of 16.  The USB port may also be used as a MIDI interface to your computer or mobile device.

Press and hold the center button while turning the knobs to activate the alternate controls (shown in parentheses.)

LEVEL - Adjusts the overall output level of the Defender.  The pedal has quite a bit of volume on tap, enough to overdrive your amp.

DRIVE - Controls the amount of drive, saturation, and distortion of the effect.

(WARP) - Adjusts the speed of the WARP control.  With this control at minimum the Defender will warp between the red and blue settings instantly.  With the control at maximum the pedal will take approximately 10 seconds to warp.

LIGHT - Controls the treble or brightness of the distortion effect or the cutoff frequency of the filter if FLT is selected.

MATTER - Controls the bass or depth of the distorted tone or the resonance / feedback of the filter if FLT is selected.

(TWEAK) - Adjusts the special effect for each distortion mode.  Varies for each effect, check out the descriptions below!

Select Button - tap to choose a new effect mode or hold to engage the ALT controls:

OD - Overdrive with a clear midrange character.  This mode ranges from transparent to gritty with a sweep of the Drive knob.  Try this mode with the Blend control near noon for a great soft-clipping boost.

DST - Distortion with a darker, smoother tone.  Gets hairy really quickly and loves to party.

FZ - Splattery, sizzly fuzz tone.  Don't even bother trying to get this one to clean up, sounds kind of like a toy robot being fed into a garbage disposal.

PIT - Polyphonic octave shifting, applied to the distortion signal only.  The Tweak control adjusts the blend between octave down, distortion, and octave up.  This effect is killer for sub-octave riffing or screaming fuzz freakouts.

Want to get a distortion effect without the special effects?  Just select the distortion sound you like (OD, DST, FZ) and select PIT as your special effect.  Hold the Select button and turn the MATTER / TWEAK knob to its midpoint.  The pitch effect will be bypassed and you'll just have dirt.

Tap this footswitch to accelerate the Defender into warp drive!  While Warp is active, the Defender will move to a second unique setting of your choice.  Just turn the pedal knobs while Warp is active to set the Warp tone.  Tap the footswitch again to return to the regular sound.  ALL knob settings may be changed as part of the Warp mode, but the distortion and effect selections must stay the same.

You can also hold the Warp footswitch to activate Impulse mode, which will enter and exit Warp mode only as long as you hold the footswitch down.  Try using Warp to set two different distorted sounds for rhythm and lead, or using the Impulse function to add some filtering or space delay to the climax of a solo!  The possibilities are endless, and if you engage it while flying backwards around the sun you may end up saving some whales...

The Defender features a buffered bypass using a soft-touch footswitch.  The dry signal path is digital to maintain the phase relationship between distortion and clean. The bypass signal is 100% analog.

To configure, power on while holding the center Select button and release when the program LEDs start to flash.

Turn the Rate knob to select the function for the Neo Footswitch - Counterclockwise for sequence start / restart, center for preset select, clockwise for tap tempo.

If you wish to assign the Defender MIDI channel, simply send a program change message from your controller on the correct channel while the pedal is in configuration mode.  Hold the Select button to save the pedal settings.The Defender MIDI port requires the use of either a MIDI converter box such as the Disaster Area / Chase Bliss MIDIBox or a MIDI controller that supports 1/4" devices such as the Disaster Area Gen3 series.  The Defender defaults to using MIDI Channel 1.

HOLD THE SELECT BUTTON TO SAVE CONFIGURATION

The Defender requires a 9V DC power supply with a 2.1mm pin, center negative, 80mA.  The Defender is not designed to be powered on supplies higher than 9V and does not use a battery.  The Defender should work fine on a multi-pedal "daisy chain" connector, but if you encounter excessive noise or hum try a separate power supply. 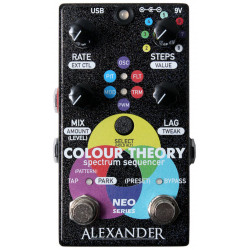 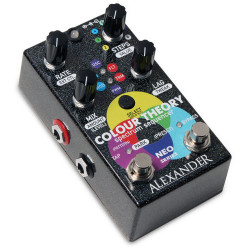 Alexander Pedals Colour Theory
Colour TheoryThe Colour Theory. Each step in its sequence is a new pathway to adventure, each new colour is part of a palette of mystery. Every moment..
225.00€
Ex Tax:189.08€
Add to Cart
Add to Wish List Compare this Product
Buy Now
Quickview 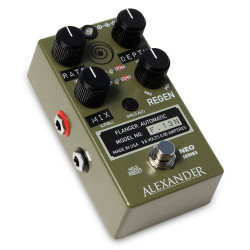 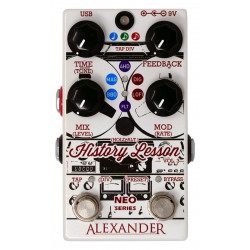 Alexander Pedals History Lesson V3 Delay
The History Lesson Vol.3 is our loving homage to the best echoes the past has to offer.We’ve included our favourite echo and delay sounds ranging back..
235.00€
Ex Tax:197.48€
Add to Cart
Add to Wish List Compare this Product
Buy Now
Quickview 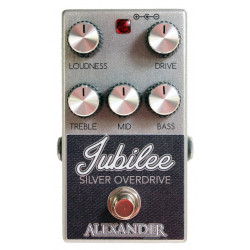 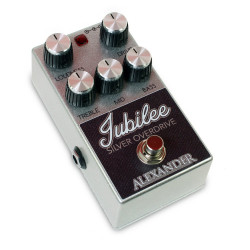 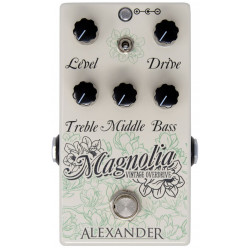 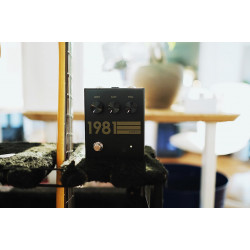 Pre-Order
1981 Inventions DRV Black And Cream
A uniquely designed steel enclosure made with quality components throughout. My goal was to spare no expense. I realize that sometimes in the world of..
299.00€
Ex Tax:251.26€
Add to Cart
Add to Wish List Compare this Product
Buy Now
Quickview 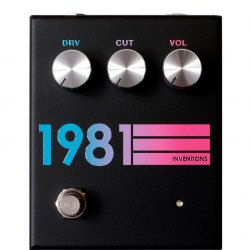 Pre-Order
1981 Inventions DRV Black Hyperfade
A uniquely designed steel enclosure made with quality components throughout. My goal was to spare no expense. I realize that sometimes in the world of..
299.00€
Ex Tax:251.26€
Add to Cart
Add to Wish List Compare this Product
Buy Now
Quickview 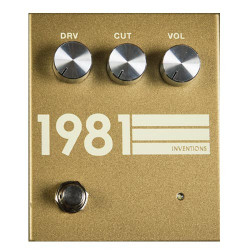 1981 Inventions DRV Gold And Cream
A uniquely designed steel enclosure made with quality components throughout. My goal was to spare no expense. I realize that sometimes in the world of..
299.00€
Ex Tax:251.26€
Add to Cart
Add to Wish List Compare this Product
Buy Now
Quickview 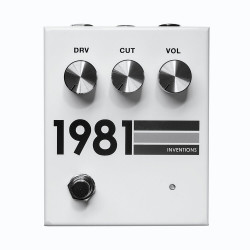 Pre-Order
1981 Inventions DRV Grayscale
A uniquely designed steel enclosure made with quality components throughout. My goal was to spare no expense. I realize that sometimes in the world of..
299.00€
Ex Tax:251.26€
Add to Cart
Add to Wish List Compare this Product
Buy Now
Quickview 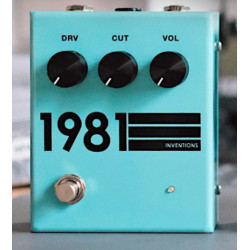 1981 Inventions DRV Teal and Black
A uniquely designed steel enclosure made with quality components throughout. My goal was to spare no expense. I realize that sometimes in the world of..
299.00€
Ex Tax:251.26€
Add to Cart
Add to Wish List Compare this Product
Buy Now